I started travelling in 1960 at the age of five. At that time our family (my brother Paul, my mother Edna and my father Max) lived in Phoenix Arizona where Max ran a collection agency – a job he hated. It had seemed like a good idea when he arrived from New York with his new bride, but once the business got off the ground he realized it was killing him. He couldn’t stand the misery he was stacking on to the lives of already desparate people who were unable to pay their bills. He knew that if he didn’t change jobs, the job would alienate him forever.

So Max sold his shares and decided to take his family on the Grand Tour of Europe, final destination: kibbutz Magan in Isreal. We boarded a dutch liner in New York and seven days later landed in Le Havre. (my first observation as the ship docked at the pier was to note admiringly to my mother “Mommy, even the children here speak french here!”) Max bought a big tent and Peugot 404 and set off with his family, spending the next year camping and travelling through England, France, Holland, Germany, Italy, Spain and finally Isreal.

Kibbutz life was a godsend for Max, whose health rebounded as he worked long hours picking crops in the hot fresh air. At night he loved sitting around the fire with the rest of the kibbuztniks, telling stories, singing songs and dancing. For the rest of the family however, kibbutz life was traumatic. My brother and I lived apart from our parents along with the rest of the children, but not knowing a word of hebrew we were unsettled by the sheer energy of the midnight pillowfights, or the cold showers all together in the morning. Edna too suffered the separation from her children and when, a few months later, her father died, the whole family returned to New York in order to spend time with my widowed grandmother.

But Max hadn’t finished dreaming. The family returned to Rome, the city they had fallen in love with as tourists. In 1961 Max applied for a job at the Overseas School of Rome and was hired as the high school Science teacher.

In 1964 we crossed the ocean once again and returned to America in order that Max could obtain a teaching degree at the University of California at Berkeley. He was awarded a scholarship to Harvard but the family, now in schizophrenic mode, wanted to return ‘home’ to Italy. That was OK with Max because also had an idea to open a used bookstore. In the meantime Edna had made a new friend in the office where she worked. Karen Pamper was breaking up with her fiancé and feeling very low. She was invited to join our motley crew and at the end of 1964 we packed the faithful Peugot 404 (called Little Joe) to the gills and headed East to catch the next ocean-liner to Europe.

Once settled in Rome Karen, Edna and Max set about looking for the perfect location to house the bookshop and found it in a small store tucked away next to the Keats Shelly Memorial at the Spanish steps. The Economy Book Center was born in 1965.

During the summers we handed the bookstore over to students or friends and travelled. How did we choose our destinations? Max would open a map of the world and either Paul or I would close our eyes, turn around three times and point. Wherever our fingers landed, that was where went. The summer of 1966 was spent camping on the island of Crete. In 1967 we travelled overland from Rome to India, managing to get only as far as Kabul, the capitol of Afghanistan, before we became too ill to travel.

In 1968 Max had kidney failure and he returned to America and was admitted to the Veteran’s hospital in Rhode Island where he remained for many months while Edna and Karen took care of the bookstore. In 1969 Max embarked on his last trip home where he died on October 3rd.

His remains were transferred to the Protestant Cemetery where I like to think he has a grand time in the company of friends like Keats and Shelley. 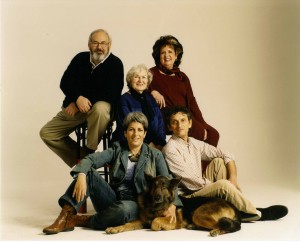