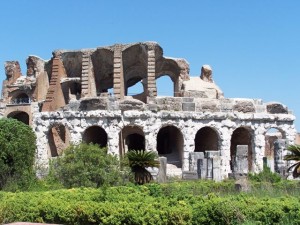 Two thousand three hundred years age, the Via Appia (or Appian Way)  was built to connect Rome with the city of Capua – now S. Maria Capua Vetere – (‘vetere’= vecchio=old). The road started at Porta Capena, one of the rare cases where the gate bears the name of the place it was headed to – an indication of Capua’s wealth and strategic importance to the Roman Republic.

Due to its wealth Capua was also home to one of the most important gladiator schools, made famous by Spartacus, who excercised and fought here and from which he organized the slave rebellion of 73 B.C.  The current arena, second biggest after the Colosseum in Rome, was built in the 2nd century A.D. by the Emperor Hadrian.

Stairways and ramps run throughout what remains of the original tiers, similar to the Colosseum, while below the arena floor ie vast subterranean passages with vaulted ceilings and a network of tunnels 170 meters long and 140 meters wide. Here the scenery and props, gladiators and animals waited to be lifted by elevators into the arena… (literally “sand” in Latin, as in the sand which covered the floor of the fighting area).

The amphitheater is both spectacular and evocative, not only for its beauty and magnificence, but because there are so few visitors.  One can’t help but feel like an 18th century traveller, rediscovering long forgotten ruins under a warm, clear blue sky. Nowadays you can wander here for hours without seeing more than 4 or 5 people, a far cry from the 50,000 spectators that would regularly fill the amphitheater 2000 years ago.